This video is Part 2, it shows how the New Formula for 3 has been VALIDATED using n=3 million correcting e to 13 decimal places.

Jain 108 discovered a better way for defining the formula for “e” = 2.718281828459045 etc.
This is the Exponential Number for nature’s growth and decay. “e” is the mathematical constant that measures the growth of human populations or viral colonies. It also is used in Compound Interest formulae, in Physics, it is used to establish the half-life of an element by studying its radioactive decay, and is used by coroners to predict the time of someone’s death for murder investigations.
It appears to act like the Phi Ratio, connected to biological systems, but is another separate entity, and is as important.
I first Published this Discovery briefly in “In The Next Dimension” aka The Book of Phi, Volume 2, by Jain in 2003 but was received in 2000.

In other Discoveries:
Jain independently revealed the Infinitely Repeating 24 Pattern in the Fibonacci Sequence, by continued subtraction of 9 aka Digital Roots or Digital Compression.
He also discovered 2 important codes in the Wheel of 60 revealed when we continually subtract 10 from the Fibonacci Sequence, which is really observing the final or end digits, to show that a spiral pattern of these 60 infinitely repeating digits actually reEnters itSelf precisely on the 60th digit, and also that there is a hidden Harmonic 1111 and 6666 code embedded in the Wheel of 60… see the articles on this on this site. There is great practical applicability to this Fibonacci 60 Code because Tesla knew that the 60 hertz or cycles per second in our electrical world is the most conducive for the human condition.
The Pervasiveness of Phi (1.618033988…). Jain can mathematical show that Phi is in all important systems, in biology, in crystals, in space, in atoms, and mathematically it is seen everywhere in the Doubling Binary Sequence (1-2-4-8-16-32-64), in the Pythagorean 3-4-5 Triangle, surprisingly in the Equilateral Triangle, in Magic Squares, in Prime Number Sequences etc. 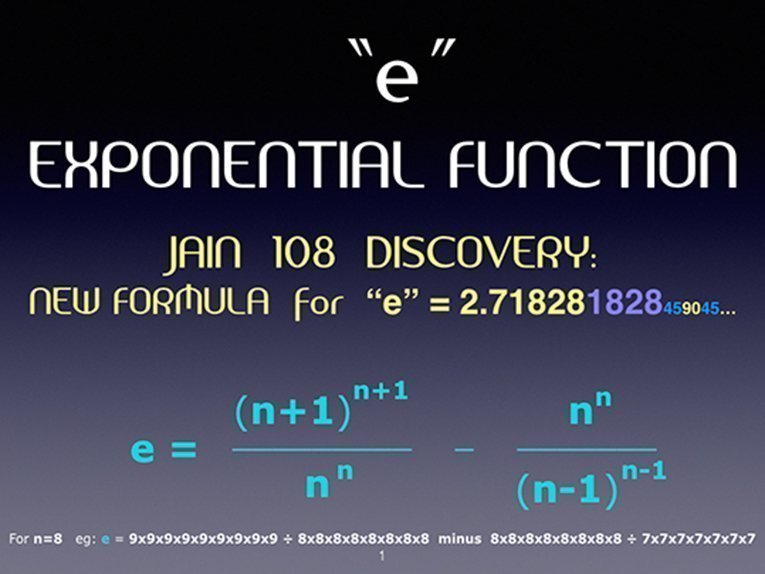 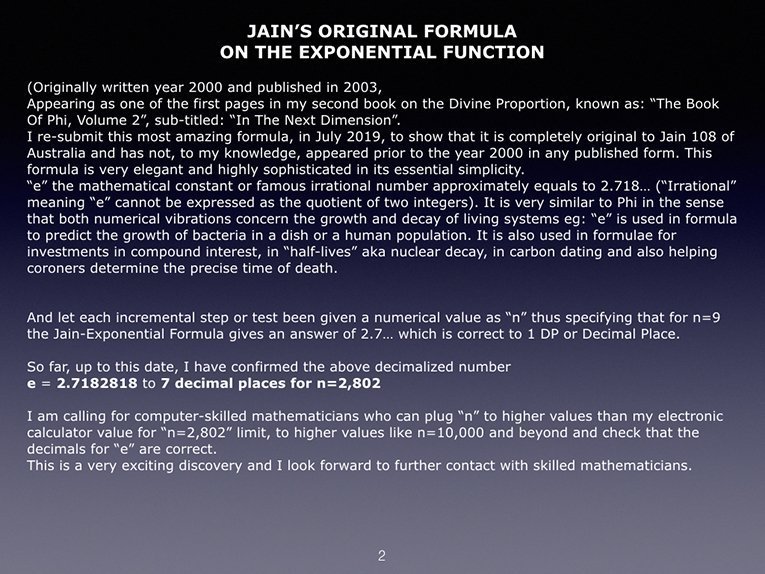 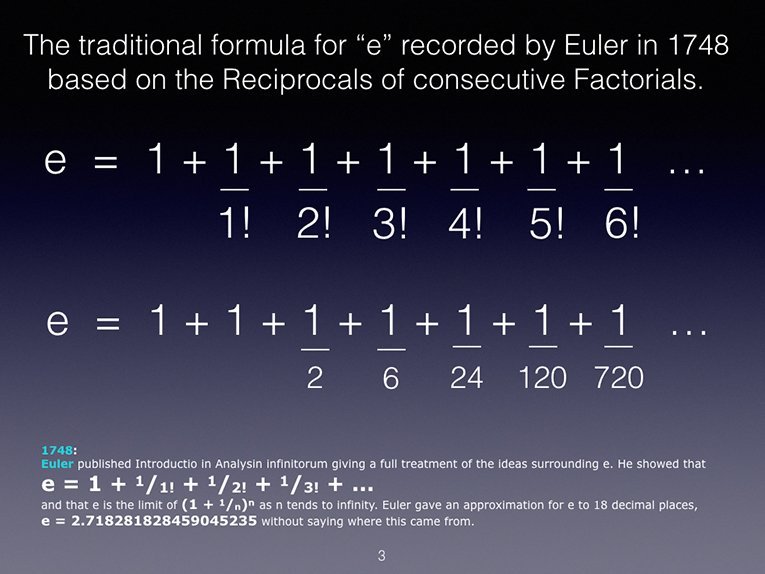 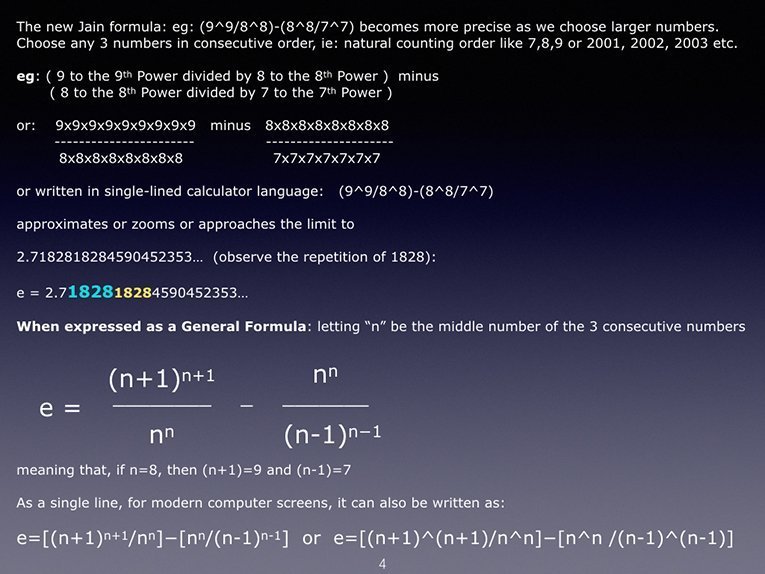 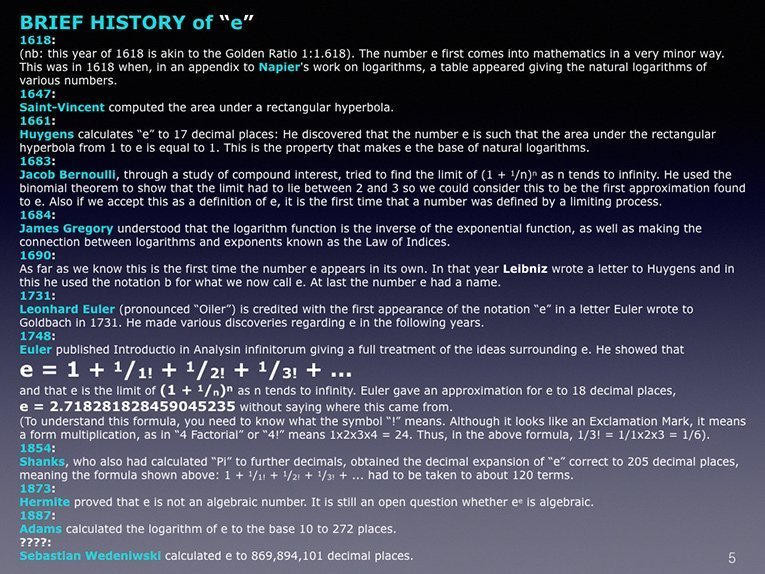 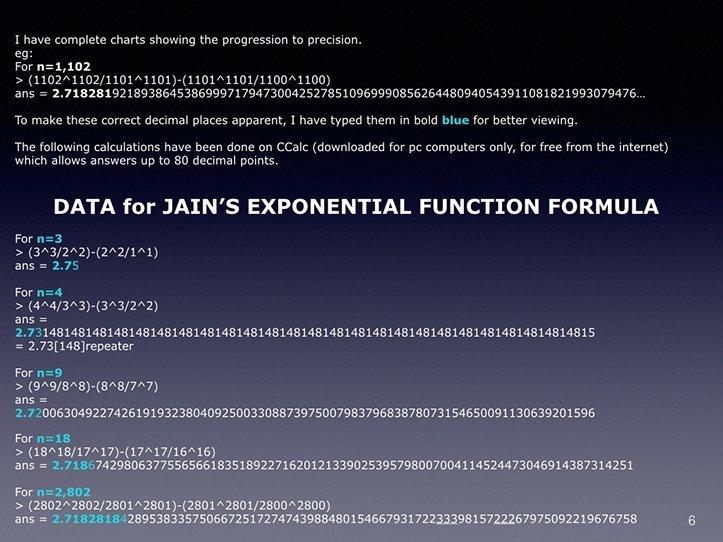 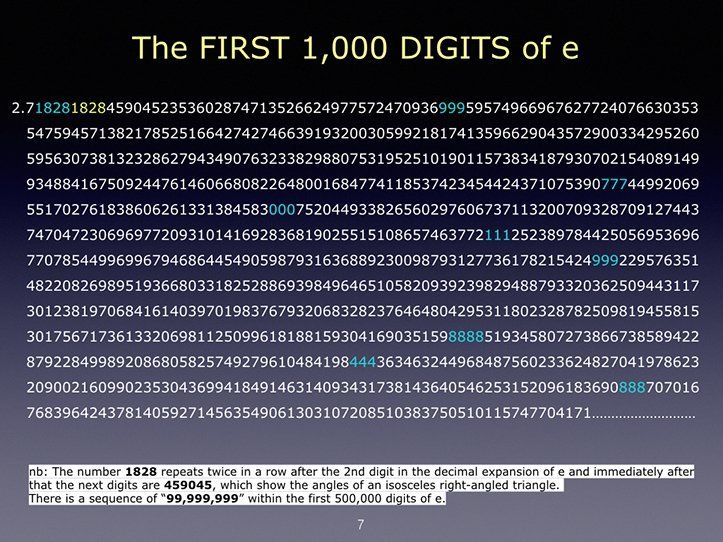 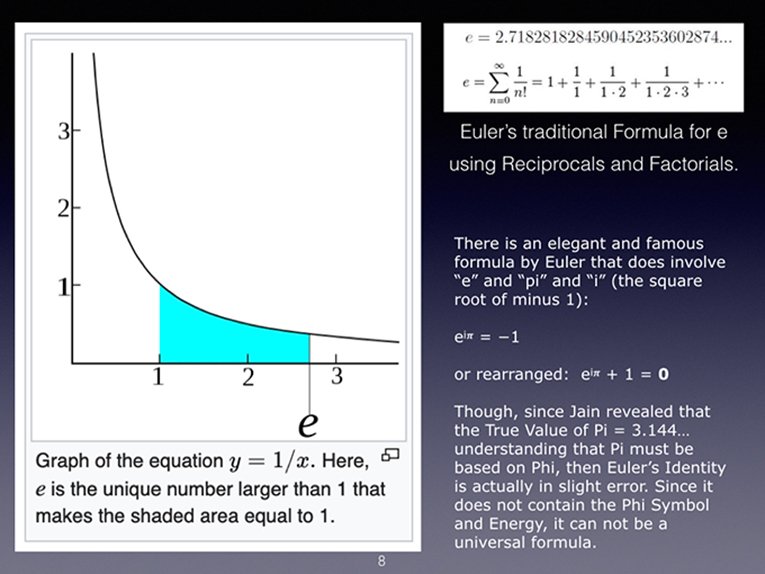 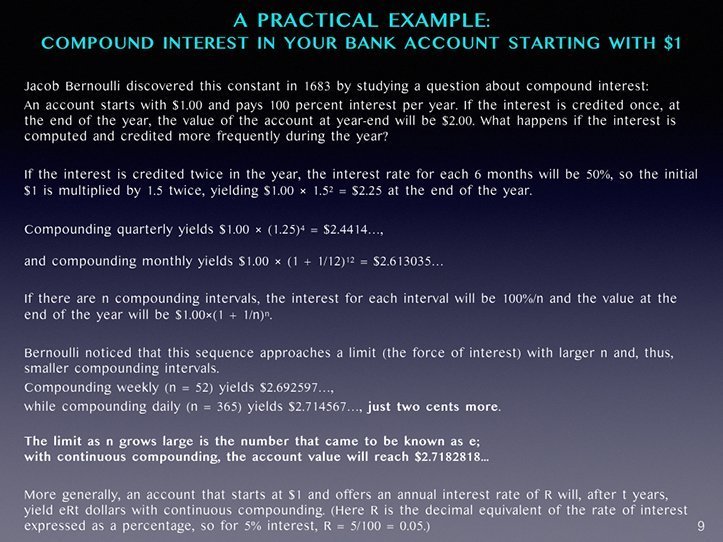 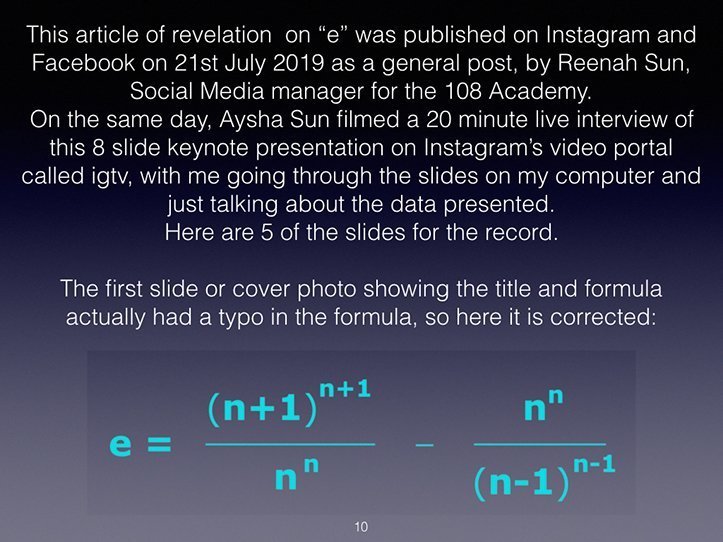 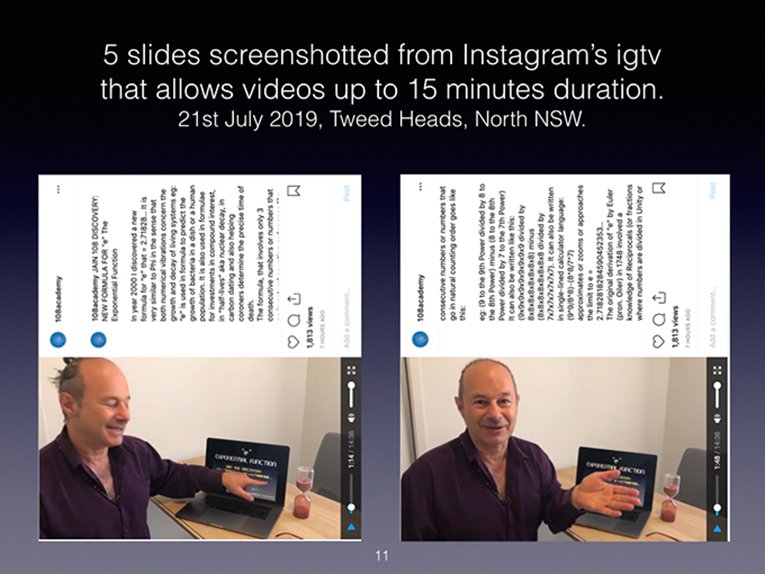 This is a screenshot taken from the 15 minute video that was made of this e Discovery New Formula, July 2019 on Instagram and Facebook.
It basically was a call out to advanced computer-skilled mathematicians to plug n to say 100,000 to advance and validate that this formula indeed does give the true value of e = 2.718281828…   It appears that we need to plug in n up to 1 million, or 1 billion, so I am awaiting for this to happen from those who have the skills to do so. 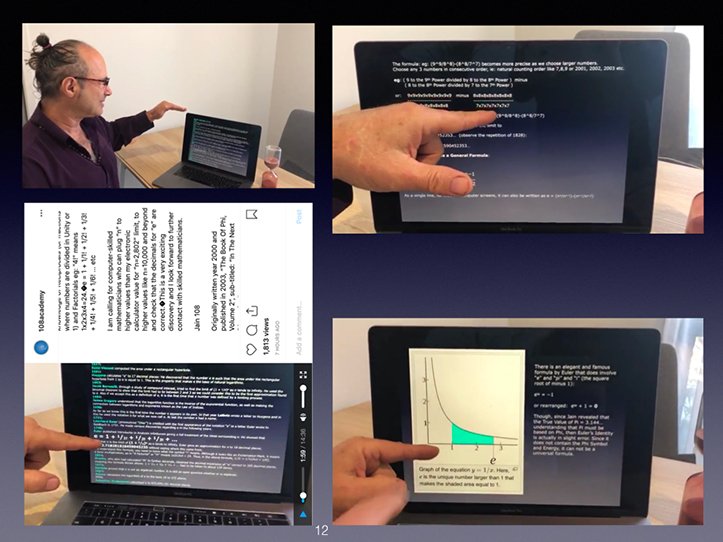 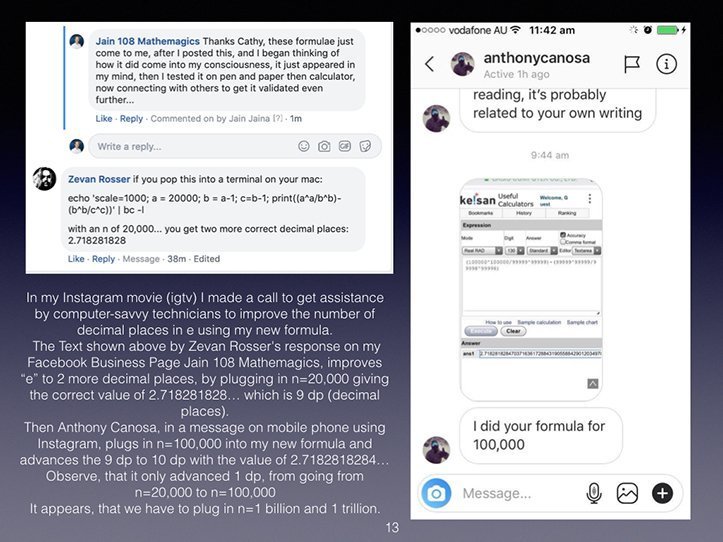 Credit goes to Zevan Rosser and Anthony Canosa who plugged in n to 20,000  then to 100,000 to validate that Jain’s New e Formula is correct. 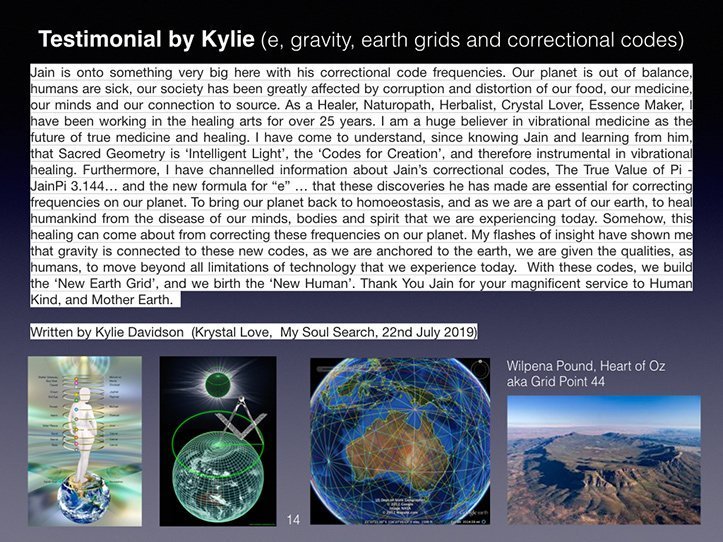 Testimonial by Kylie Davidson who predicts that this new e Formula is somehow connected to Gravity and Earth Grid Correctional Codes. 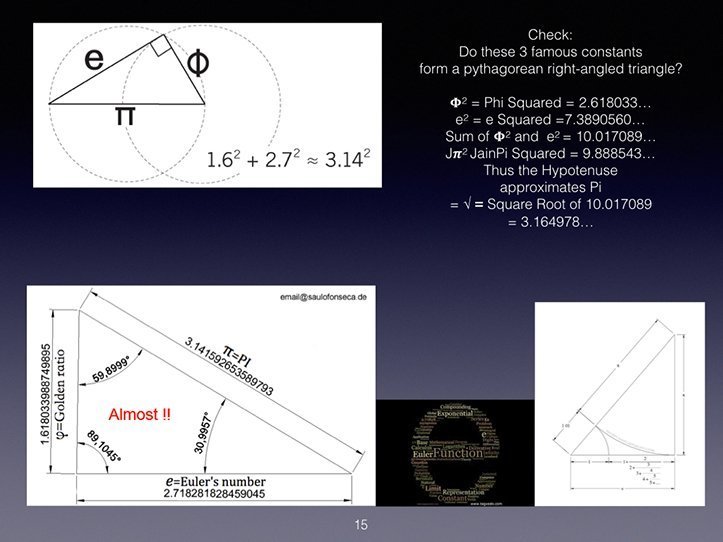 There is a special relationship between the  3 top mathematical constants known as Phi, Pi and the Exponential Function. They are shown here to be involved with the Pythagorean 3-4-5 Triangle, but the mathematics to prove this is only 99.9% correct. 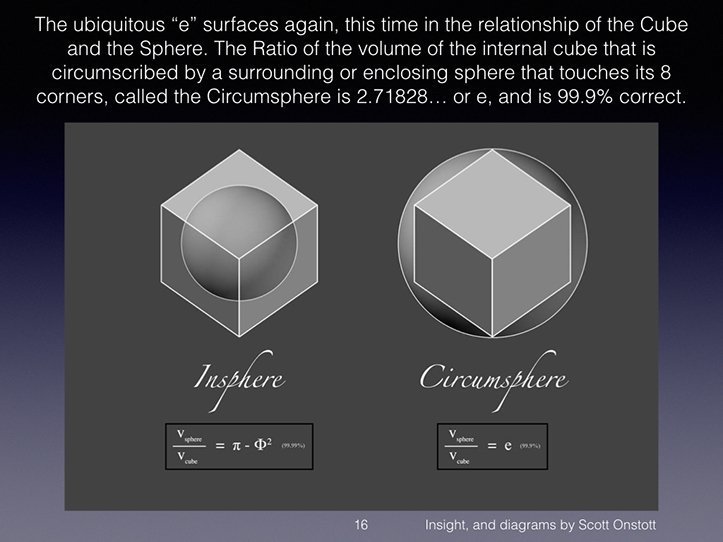 Thanks to Scott Onstott who offered this brilliant connection to e regarding the ratio volume of a sphere and a cube!

If you would like to have this 16 page article as a PDF, and contribute some feedback regarding this New Formula, please contact me via email on [email protected].
Thanks for your time reading this.

Here is the 15 minute video of this e article, that was originally first shown on our Instagram page called @108academy. 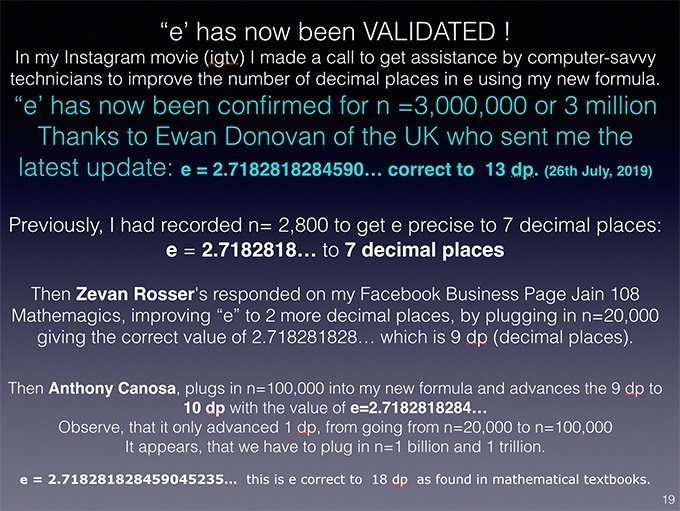 UPDATE 2 on “e: Jain’s Discovery” with Acknowledgement to H.J. Brothers and J.A. Knox

I would like to express that one reader claimed that he scoured the internet and on Wikipedia he found the so called Jain “e” formula (published by Jain in 2002 but realized around 2000), in another 1998 journal called “The Mathematical Intelligencer, Vol 20, No. 4, (1998), pp. 25-29”. It had a name called:
“e the Symmetric Limit”.Citation [7] H.J. Brothers and J.A. Knox, New closed-form approximations to the Logarithmic Constant e. In this regard, I humbly acknowledge that indeed the 2 mathematicians Brothers and Knox did publish the same formula that I had independently realized, so credit must go to them, but I claim that I had no knowledge of this journal, that also published 7 other different ways of achieving “e” to high decimal accuracy, that I had not seen this in print anywhere, thinking that there was only one traditional way of deriving “e’ via Euler’s fractional factorials. In the article I read, it said that the first evidence of “e” was by Joost Burgi in 1620 correct to 3 decimal places, before Newton had published his version in 1669.
The reader from Instagram had a code name of: Arrebarritra, this is what he kindly sent: 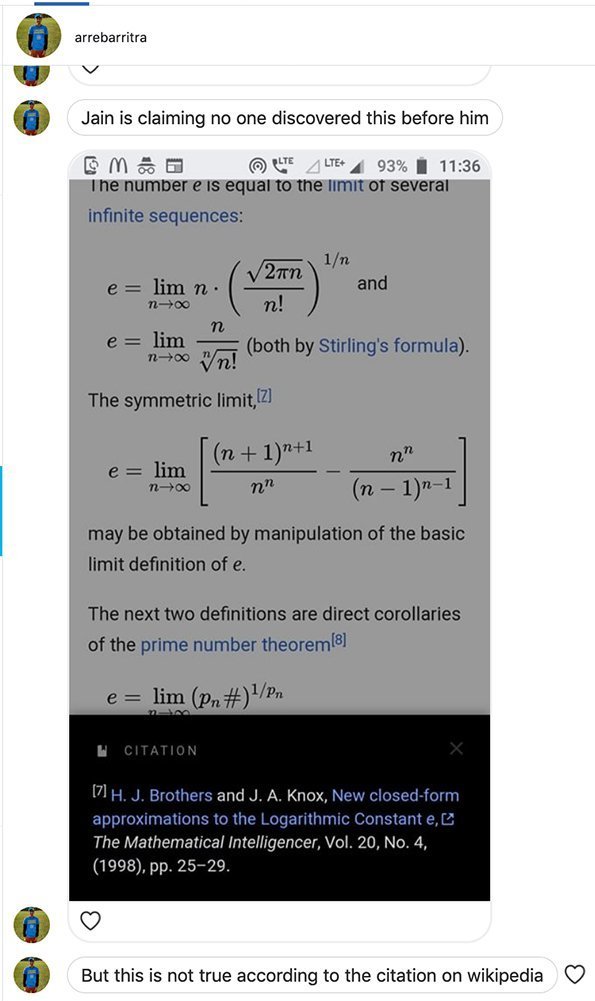 The next 2 images below are taken from Wikipedia:

Just for the reader’s reference, I am including the first 2 pages of the “7 New Ways of Deriving e” as published in the Mathematical Intelligencer in 1928, to show that great minds are at work here, and it is a pleasure to acknowledge them, and consider myself as one of these researchers. The second page shown here does not show the one that I discovered, there are meant to be a few more pages but they were not released on the internet unless you became a subscriber to the magazine; it is included just to show the mathematical depth of the article. 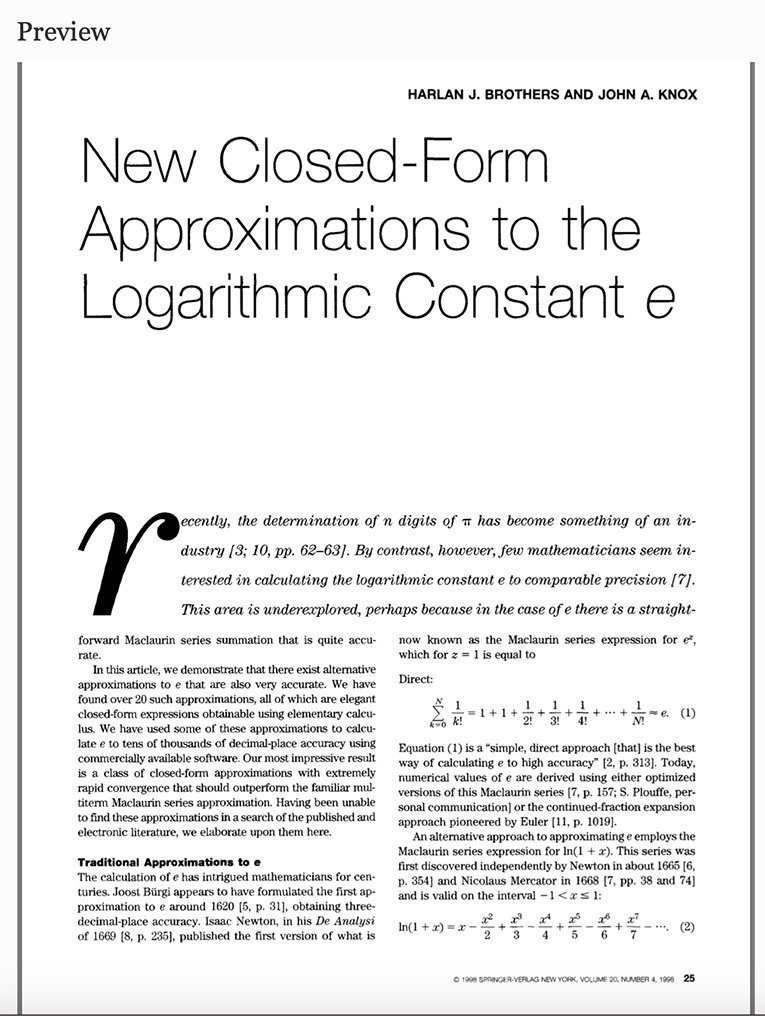 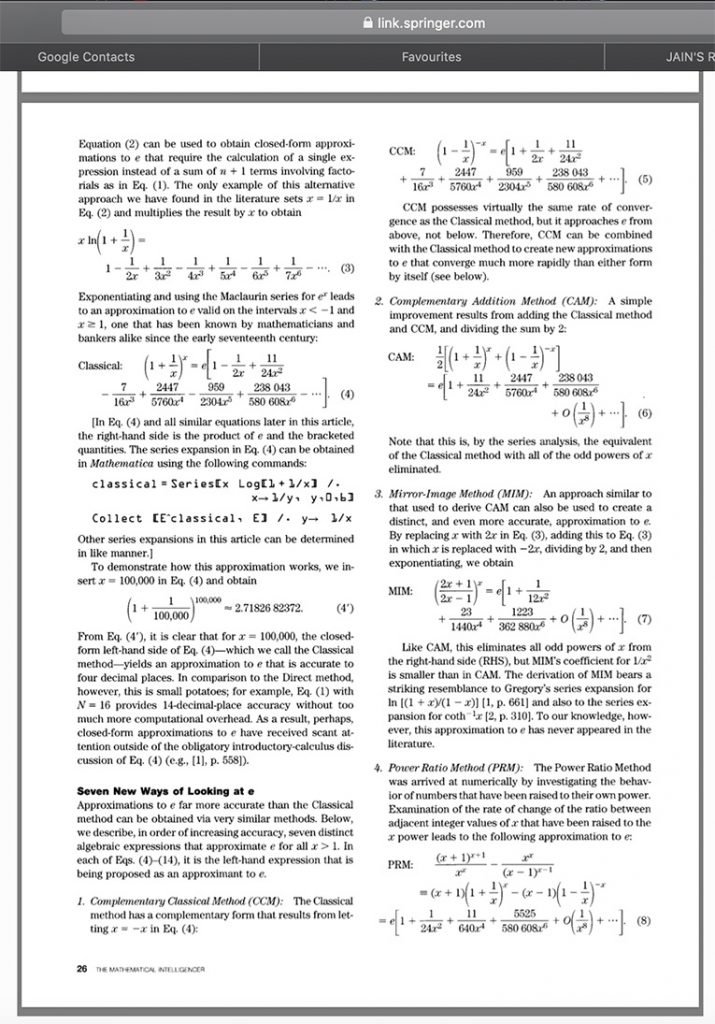 I would like to conclude that the lesson I have learnt here is not to assume that you have discovered anything, since the age of the Internet, there exist many like Minds, all who believe they have independently Cracked A Code, not realizing that this is Universal Knowledge, and that all we are really doing is ReMembering this lost Knowledge. If a mathematician needs to have their name to a discovery, it is safe to call it a “Re-Discovery” and without being criticized as having a great Ego, it is understood that such self-proclaimed mathematicians are genuine questors for this mysterious symmetry, and by having their name attached to an assumed Discovery is merely an acknowledgement that they have devoted their time and lifeforce in the pursuit of the evasive Laws of Numbers. (When I studied Professional Writing at university in my early years, my teacher insisted that we always acknowledge the source of any sentences or paragraphs or quotes designed or penned by others, expressing that in the event that the quoted material was in error, then this act of quoting their name to the source actually protects the writer. Thus it is our duty to always quote the source of our material and not just paraphrase it with the intent of claiming someone else’s original work as our own. In this light, I acknowledge the “e” discovery that I thought I had discovered as the intellectual realization of H.J. Brothers and J.A. Knox.
Regards, Jain
23-8-2019. Mullumbimby Creek.