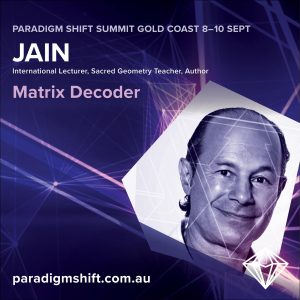 I am proud to announce that I have been offered to speak again at the upcoming Paradigm Shift Conference,
happening September 8th and 9th weekend, with a Day Conference on The True Value of Pi 3.144… on the Monday the 10th September.
Name of Lecture

THE FLOWER OF LIFE DECODED

Join Jain in his fascinating powerpoint presentation that will further your understanding of the ancient Flower of Life pattern, also known as the Mother of All Creation.
The template of the Vesica Piscis, having 2 intersecting circles touching one another’s heart centre,
is embedded at the core of the Flower of Life yantra.
This blueprint of celestial mathematics is now in the mass consciousness, is worn commonly as jewellery, and underpins all atomic structure and biological forms. Shape Stores Memory.
Though, to get to the Next Level of comprehension of this most ancient symbol,
Jain will show how the Harmonics of the Circle and the traditional value of Pi 3.141…
is really deficient and disharmonic, and that the True Value of Pi aka JainPi is based on the Giseh Pyramid Maths, constituting a shift towards non-polluting physics that advances our technology and environmental awareness,
when scientists embrace the ecosophical and Correctional Codes of 3.144…

Our modern world of hi tech advancement, engineering and architectural wonders, is based on Pi, the Circle-Square relationship, where the side of the square is 1 unit, giving the Perimeter of the Square to be 4 units, and the Circle inside this having a Circumference of 3.141… or so it has been said for 2,000 years. Could our ancestors have got it wrong!
Thanks to Jain and some other leading Researchers like Professor Panagiotis Stefanides of Greece, traditional Pi is Deficient by a value of .003 or 3 parts of a 1000.
Jain and Stefanides believes that Pi must be based on Phi, that the True Value of Pi is irrefutably 3.144… (derived from the 4 sides of the Square divided by the classical height of the Giseh Pyramid being 1.272… aka the Golden Root, giving the equation of 4 divided by 1.272… = 3.144…).
– Join Jain in this fascinating adventure of assassinating Pi and follow the Path into the True Harmonics of the Circle, and learn why this incorrect version of Pi keeps the modern world in a disharmonic atmosphere, a reason why cancerous mobile phones are wi-frying us, because the underlying phi-pi harmonics are unstable.
– Learn why NASA are already using this JainPi or True Value of Pi.
– A whole day to enjoy and learn from Jain’s seminar that will make you question the fragmented maths curriculum you were forced to learn at school.
– For the serious student, there are 2 full books just on this topic – Is Pi a Lie?
– In 1995, Billy Meier made a prediction that when scientists learn and begin to apply the True Value of Pi, the world will enter a new level of consciousness based on Ecosophical, non-polluting Physics and the utilization Implosive Black Holes, Time Travel, Vibrational Healing etc all based on the Correctional Codes of 3.144…