This is your chance to learn all the valuable mathematical and geometrical knowledge of the Ancient Civilizations.
and pass on the essence of this to your children 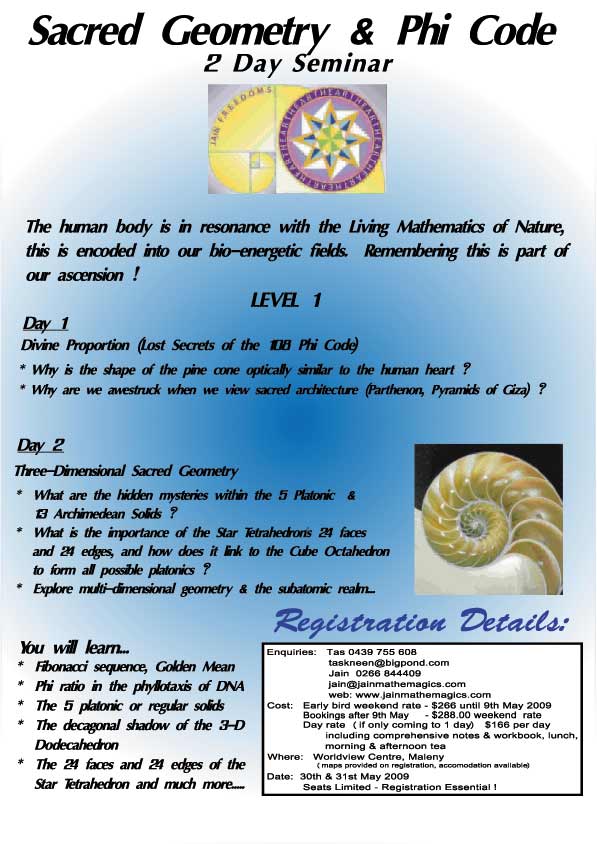 May and June 2009 SEMINARS
in AUSTRALIA:

being organized by Tas Kneen in the SUNSHINE COAST.

I will be giving a weekend lecture
on the following two topics:
SACRED GEOMETRY &
the PHI CODE

On the PHI CODE or Divine Phi Proportion +

On the 3-Dimensional Geometries of the 5 Platonic Solids,
how they relate to crystals and atomic sturctures.

Both these days are at Level 1 (Introductory Level)
on the weekend of the 30th and 31st May 2009
at the World View Centre, Maleny.

(Level 2 is Beginners Level
and requires another day on both these topics;

and Level 3 is Advanced Training,
and requires another day on both these same topic as well.
Level 4 is the Teacher Trainer segment.

All participants for these weekend seminars
are given 30 page workbooks per day
and certificates of completion),

weekend seminar at the WorldView Centre,

Saturday the 20th June:
The Atomic Art of MAGIC SQUARES
&

The Art of Rapid Mental Calculation

The 12 days courses
that will follow for the next season
of international study
for 2009 and 2010:

PROGRAMME OF STUDY DURING THE 12 DAYS
The complete seminar lasts 12 days divided into 4 weekends.

Contents of Study
A specific topic is dealt with during each 3 day weekend
(Friday, Saturday and Sunday).
The programme has been developed and realized by Jain 108
over the last 30 years thanks to his teachings all over the world.
It is dedicated to everyone:

parents and children, teachers and freelancers;

to the people who want to expand their knowledge.

in your head!
Used by NASA but not released to the public, Vedic Mathematics is on the leading edge of rediscovered technology –

an ancient yet simple system of mental online arithmetic.
Jain will show you the 16 basic Sutras – Word Formulae –

which can solve all known mathematical problems.
You will learn to multiply 2-digit x 2 Digit numbers, like 24 x 24

in your head…with no calculator, pen or paper.

that lay hidden within the chaos…

atomic structures often symbolic of life’s journey.
The Magic Square of 3×3, known as the Lo-Shu, in ancient China,

is the centre of the Sino/Tibetan Cosmology.

The sums of the columns, rows and diagonals all add up to 15,

symbolically creating Order amidst the Chaos,

and Equality in all dimensions.
Jain will show you how to create complex and intricate atomic art from numbers in various Magic Squares.

why the shape of the pine cone

is optically similar to the human heart,

why we are awestruck when we view Sacred Architecture

like the Parthenon of Greece and the Pyramids of Giza,

and why we are attracted to the famous Monna Lisa.
Discover the secret codes concealed in the Gayatri Mantra,

the most famous Eastern prayer for Enlightenment.
The human body is in resonance with

the Living Mathematics of Nature.

Embrace part of the Ascension process already morphologically and geometrically encoded into our bio-magnetic and bio-electrical fields.

Jain will help you grasp the concepts of a

Fourth Dimension and Time Travel.
Discover the importance of the Star Tetrahedron’s 24 faces

and 24 edges, and how this links to

the 24 edges of the Cube Octahedron…

the compressible and alchemical shape

and the 13 Archimedean Solids.

Learn the 3-Dimensional form of the 5-pointed star

that Pythagoras called the fifth element – Spirit aka Dodecahedron.
Learn the true value of Pi,